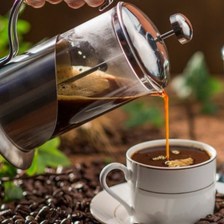 French press - the name of the device for making ground coffee, as well as the method of preparing coffee by infusion and pressing.
The device was invented by the Italian designer Atilio Kaliman in 1929 and has nothing to do with France. The device was named so that it was sold better.